The suburb of Epping is split between precincts areas: Epping (80 per cent) and Epping North (20 per cent along with a portion of the suburb of Wollert).

This place snapshot provides a summary of future development in the Epping and Epping North areas for current and future residents, business owners, investors and community groups. 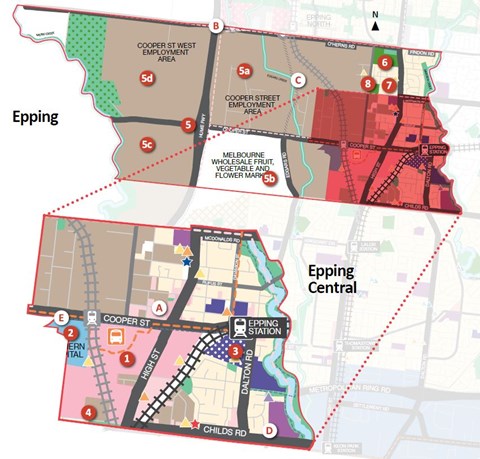 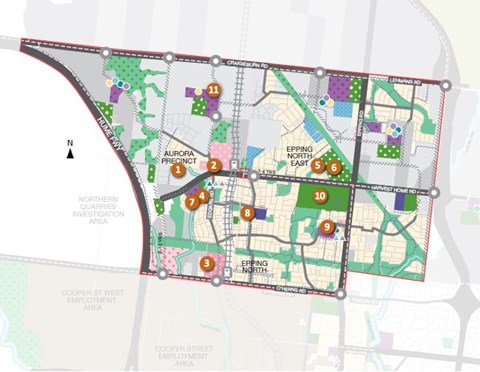 The suburb of Epping is split between precincts areas: Epping (80 per cent) and Epping North (20 per cent along with a portion of the suburb of Wollert).

Epping North a precinct in Epping includes parts of the suburbs of Epping and Wollert within its boundaries.

European settlement of Epping dates from 1839, with land used mainly for farming (especially dairy farming) until the late 1900s.

Originally named Darebin Creek, the area changed to Epping in 1853, reportedly after the Epping Forest in Essex, England.

Epping remained a township until the late 20th century, with the majority of settlement and development contained to the historic township area north of Cooper Street flanking High Street.

Epping Central is a designated Metropolitan Activity Centre and is recognised as an area of significant growth, employment, new housing, services and entertainment options.

The Epping Central Project will transform Epping into a thriving regional centre with a mixed range of new services, facilities and infrastructure from the City of Whittlesea, state government and the private sector.

This project is guided by our Epping Central Structure Plan that sets out the long-term vision for the Epping Central area, including where and how land will be used and developed over the next 20 years.

The plan sets out a vision for the area including:

The plans below show the proposed development for a number of new housing estates in Epping. Development of these estates will generally follow the plans but is subject to change.

If you are unable to access the information in the above plans, please call 9217 2346.

The median age of residents is expected to remain at 36 in 2035.

Around 40 per cent of people speak a language other than English at home.

Currently the most common languages spoken are Macedonian, Italian and Arabic. Most common countries-of-birth other than Australia are India, the former Yugoslav Republic of Macedonia and Italy.

Epping has the second largest proportion of residents who identify as Aboriginal or Torres Strait Islander compared with other areas in the municipality (behind Whittlesea Township).

About 57 per cent of the population speak a language other than English.

About 15 per cent are single parent households and the number of 1-person households is expected to increase by about 600 by 2035 (or 51.3 per cent).

There are more residents working in the manufacturing and the retail trade industries compared with any other industry.

There are more clerical and administrative workers in Epping than any other occupation (16.8 per cent).

There are a similar number of residents (15.7 per cent) attending school (primary, secondary and kindergarten) compared with the broader population of Greater Melbourne.

Just over half of the households consist of couples with children.

There are more professionals (17 per cent) and clerical/administrative (16 per cent) workers than any other occupations.

The most common industries of employment are manufacturing (15 per cent) and health care and social assistance (12 per cent).

There are slightly more children attending kindergarten (2.2 per cent) and primary school (9 per cent) compared with the population of Greater Melbourne (1.7 per cent and 7.6 per cent). 48 per cent of residents have a tertiary or vocational qualification.

Over half of households have access to 2 or more motor vehicles and more than two thirds of residents drive a car to their place of work.

In 2015 about 66 per cent of households have access to 2 or more motor vehicles and 68 per cent of residents drive a car to their place of work.