Bundoora is a local Aboriginal word meaning ‘the plain where kangaroos live’. In 2015, it is estimated 13,500 people live in Bundoora (within the City of Whittlesea) with a projected increase of about 1,800 people by 2036.

Find out about the Draft Masterplan for Botanica Park

This place snapshot provides a summary of future development in the Bundoora area for current and future residents, business owners, investors and community groups.

You can also download the Bundoora place snapshot (PDF – 1.23MB ) 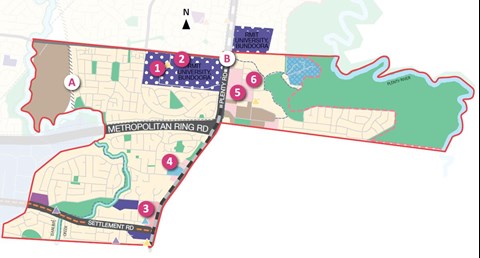 Bundoora is a local Aboriginal word meaning ‘the plain where kangaroos live’. Bundoora was named after Keelbundoora, which was the name of the parish (land) where Bundoora exists today.

Keelbundoora was also the name of the young boy present at the signing of the Batman treaty, a historic land agreement made by European settler, John Batman with the Aboriginal people of Melbourne in 1835. The treaty was later ruled invalid by the government of the day.

Only a small part of Bundoora is within the City of Whittlesea boundary, the rest of the suburb is served by the Darebin City Council and Banyule City Council.

Approximately 45 per cent of the population resides in the City of Whittlesea, 37 per cent in Banyule and 18 per cent in Darebin.

European settlement of the area dates from 1838, with land mainly used for farming.

The number of residents was small until the late 1800s. Significant development did not occur until the post-war era with Bundoora experiencing substantial growth in the 1960s, due to home affordability and provision of employment.

Residential, retail and commercial growth is expected to continue particularly in the University Hill development.

The University Hill (The Janefield) development plan shows the proposed development for this housing estate in Bundoora. Development of these estate will generally follow the plan but is subject to change.

Find the location of University Hill on our interactive map

Bundoora has the largest proportion of young adults aged 18 to 24 in the municipality (13 per cent). This is probably due to the presence of 2 universities in Bundoora. By 2036, the most populous age group is expected to be 35 to 49 year olds.

In 2015, it is estimated there will be 169 births (3 births per week on average) and this will remain reasonably constant to 2036.

Almost half of Bundoora’s residents (45 per cent) speak a language other than English at home with the most common languages spoken are Mandarin, Italian and Macedonian.

There are more residents working in the retail trade, health care and social assistance, than any other industry.

There are less residents attending primary, secondary and preschool, although there is a larger proportion of people attending university compared with the broader Greater Melbourne.

Seven out of 10 residents drive a car to their place of work with over 60 per cent of households having access to 2 or more motor vehicles.