This place snapshot provides a summary of future development in the Doreen area for current and future residents, business owners, investors and community groups.

You can also download the Doreen place snapshot (PDF - 865KB ) 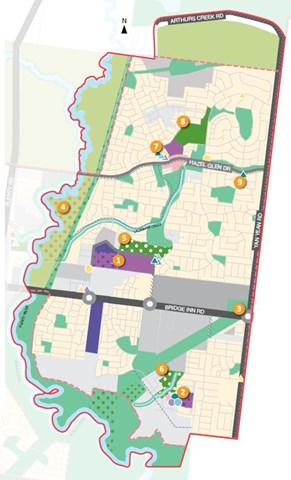 Yan Yean is a local Aboriginal name for ‘young man’ (derived from yan yan) in Woiwurrung the local language of the Wurundjeri people.

European settlement started in 1844, the area originally named ‘Hazel Glen’ was changed to Doreen in 1895.

Doreen, a rapidly developing residential area located 26 kilometres north-east of Melbourne’s city centre, as of 2015 is one of the fastest growing areas in Australia.

Our Mernda Strategy Plan 2004 (amended in 2008) provides the planning and design framework for development of the Mernda and Doreen growth area over the next 15 to 20 years.

These plans show the proposed development for a number of new housing estates within Doreen. Development of these estates will generally follow the plans but is subject to change.

Some of these plans are only extracts from the full development plans. To request a complete plan with related policy content, or if you are unable to access the information in these documents, please call 9217 2346.

To view the location of these housing estates, access our interactive map

While in 2015 about 25 per cent of the population is aged between 35 to 49, by 2036 there will be a significant increase in the proportion of residents aged over 50.

In 2015 around 1 in 10 residents speak a language other than English at home with the most common languages spoken being Italian, Greek, Macedonian and Arabic.

In 2015 the most common occupations are technician and trades workers (18 per cent) and professionals (20 per cent). More residents work in the construction industry compared with any other industry and a higher proportion compared with Greater Melbourne (25 per cent versus 8 per cent).

Almost eight in every 10 dwellings have access to 2 or more motor vehicles and about 73 per cent of residents drive a car to their place of work.