Mernda means young girl (derived from murnmurndik) in Woiwurrung the local language of the Wurundjeri people. By 2036 it is estimated that the population of Mernda will increase by about 68 per cent from 16,800 (in 2015) to an estimated 28,200.

This place snapshot provides a summary of future development in the Mernda area for current and future residents, business owners, investors and community groups.

You can also download this information as a document (PDF – 1.18MB ). 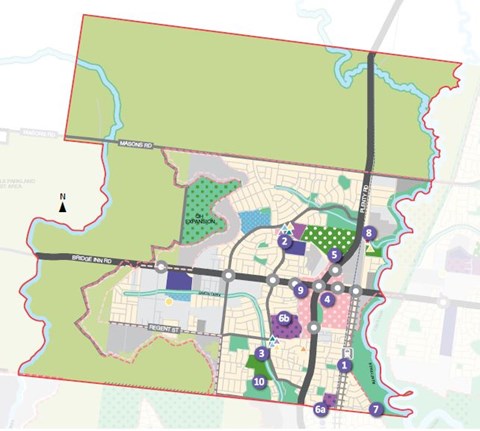 Located 30 kilometres north-east of Melbourne’s city centre, Mernda is a rapidly developing residential area of around 17 square kilometres. As of 2015, it is one of the fastest growing areas in Australia. When fully developed, Mernda will accommodate over 30,000 square metres of retail space for supermarkets and shops and around 80,000 square metres for commercial use for offices, small businesses, medical facilities, gym and child care.

Our Mernda Strategy Plan 2004 (amended in 2008) provides the planning and design framework for development of the Mernda and Doreen growth area.

These plans show the proposed development for a number of new housing estates within Mernda. Development of these estates will generally follow the plans but is subject to change.

Some of these plans are only extracts from the full development plans. To request a complete plan with related policy content, or if you are unable to access the information in these documents, please call 9217 2346.

Mernda means young girl (derived from murnmurndik) in Woiwurrung the local language of the Wurundjeri people.

Europeans settled in the 1840s; the land was mainly used for dairy farming. Early industry included a unique concentration of flour mills along the Plenty River.

In the early 1900s there were many dairy farms in Mernda that supplied milk to Melbourne.

Mernda has the third largest Aboriginal and Torres Strait Islander population in the municipality, behind Whittlesea Township and Epping.

In 2015 the most common types of occupation are professionals (18 per cent) and technicians and trades workers (18 per cent). More residents work in the construction industry compared with any other industry.

In 2015, 72 per cent of dwellings have access to 2 or more motor vehicles and 73 per cent of residents drive a car to their place of work.