This place snapshot provides a summary of future development in the South Morang area for current and future residents, business owners, investors and community groups.

You can also download this information as a document (PDF – 1.36MB ). 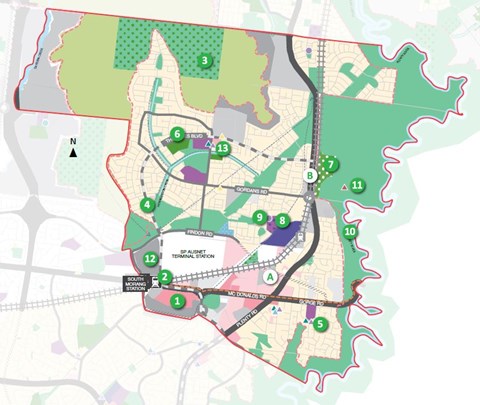 South Morang is named after the area of Morang where the suburb exists today.

European settlement started from 1870s with the post office opening in November 1873 followed by the first primary school in 1877.

These plans show the proposed development for a number of developments within South Morang. Development of these sites will generally follow the plans but is subject to change.

Some of the plans below are only extracts from the full development plans. To request a complete plan with related policy content, or if you are unable to access the information in these documents, please call 9217 2346.

(this block hasn't been configured properly, please select the folder where the files are located)

Council is advocating to the state government to invest in a Civic Precinct on the Civic Centre at Ferres Boulevard that potentially includes:

The most common languages spoken other than English are Macedonian, Italian and Greek and the most common countries-of-birth other than Australia include India, Italy and the former Yugoslav Republic of Macedonia.

The most common types of occupation are clerical and administrative workers (18 per cent), with more residents working in manufacturing and retail than any other industry.

There are proportionally more residents who are attending school (primary, secondary and pre-school) compared with the broader population of Greater Melbourne (21 per cent versus 16 per cent).

About 70 per cent of households have access to 2 or more vehicles with residents more likely to drive a car to work, compared with the broader population of Greater Melbourne (74 per cent).

Westfield have an approved planning permit to develop an entertainment and leisure precinct at their Plenty Valley shopping centre.

The new development is proposed at the western end of the centre, close to South Morang Train Station.

Once completed the precinct will include:

The timing of these works rests with Westfield, visit the Westfield Plenty Valley website for the latest details on the development.